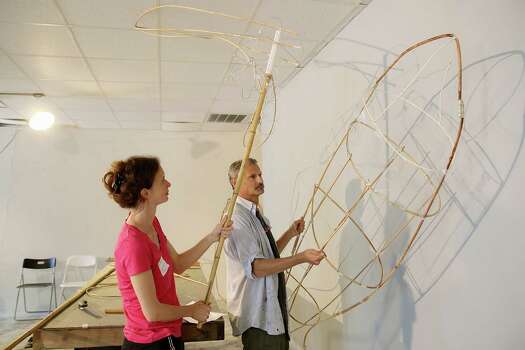 Sophia Michahelles and Alex Kahn of Processional Arts Workshop check on the progress of art pieces that will be used as illuminated sculptures to mark the opening of an upgraded Buffalo Bayou Park The Buffalo Bayou Partnership is planning a parade of the sculptures to mark the opening and invites volunteers to construct art to carry in a commemorative procession. Sophia Michahelles and Alex Kahn checking on the progress of some of the pieces at Canal Street Gallery. Photo by Pin Lim.

Although recent flooding has delayed a public celebration for the upgraded Buffalo Bayou Park until fall, the nonprofit group managing the renovations has started garnering community help to prepare for that party.

The Buffalo Bayou Partnership is planning a parade of illuminated sculptures to mark the occasion and is on the hunt for creative volunteers to construct the lanterns and carry them in a commemorative procession.

Multiple phases of the $58 million park restoration have been completed, and area residents have taken to the newly paved pathways, jogging and biking along the restored waterway in the 160-acre park.

“It really rewarding to see so many people using the bayou like never before,” partnership president Anne Olson said.”It’s taken a lot of time, a lot of work and a lot of people. So, we want to make sure that this final celebration is really, really special.”

Volunteers are needed to build unique art pieces that will serve as a centerpiece of the celebration. To lead the way, the partnership has enlisted Processional Arts Workshop, a nonprofit based in New York that uses public processions and puppetry to develop site-specific artistic pieces and performances.

“I went to the group’s website, and it just looked so cool,” Olson said. “They create these processions, which are so beautiful and so creative.”

“They meet with a community or a group, and they like to hear stories,” Olson said. “They came to Houston for a few days. We invited people to workshop sessions, and they asked what the bayou meant to everyone. People talked about the history of the bayou, the flora and fauna and the types of recreation they like to do.”

Kahn explained that the artistic process relies on listening to the community.

“We don’t come in with a prepackaged event,” he said. “We’re directing creative flow. We really do want an engaged community process. People tell us their stories, and we help them, ‘Translate that into something with visual potency, something that has a sense of ceremony.’ ”

The event won’t be a parade, Kahn said.

“A procession is something that marks a space or an occasion in a way that, even if there were no audience present, would still have a significance,” he said. “A parade is a very top-down affair, whereas a procession is a bottom-up event.”

Michahelles said that movement emerged as a theme early on in the discussions.

“We barely know the city; so we come in and start asking questions,” she said. “We try to get a sense of what’s relevant. There is this sense of Houston as a city that is on the move. It’s not a static city at all.”

The duo decided to name the performance “Confluence: A Journey in Five Movements.”

Kahn said they were inspired by that 22 bayous fan across Houston, converging lines that link neighborhoods, histories, ecosystems and cultures, all gravitating toward Buffalo Bayou.

He added that there are four essential images that will be a part of the show, which are nature, the market and business side of the city, creative recycling artists and performers and the recreation enthusiasts who populate the park.

These images will each become separate processions, which will converge into a large one.

“Each stream will start in a different location, and they’ll all come together,” he said. “Our goal is to animate the entire space in a way that will keep people looking. There will be something in all directions that will come together in the end for a final hurrah.”

Recent rains submerged parts of the park, hindering use of construction equipment in the mud, and flooding left a mess to clean. Recently opened Johnny Steele Dog Park will be closed until debris is cleared. Yet little damage so far seems to have occurred, Olson said. The parks trails are considered open as long as they’re not submerged, said Guy Hagstette, project manager for the $58 million park renovation.

He said the park may be dark for a while to protect the electrical system while the land dries out. Kahn and Michahelles are in Houston for the next three weeks hosting workshops to build the illuminated sculptures, which will be part of the procession.

“We’re not handing out templates,” Kahn said. “We need the imagery to come from you.

The people who come to the workshops really are the co-creators. They will celebrate their own individual vision of the bayou.”

It’s up to Kahn and Michahelles to organize those visions into a cohesive performance piece.

“What surprises people generally about our workshops is the extent to which we’re really inviting them to be artists and not just volunteers,” he said.

Despite the delay for the celebration, the building of the procession elements will move forward without interruption.

“We decided to move ahead, because the momentum is there,” Kahn said. “We might as well take advantage of that. It’s easy to get people enthusiastic about the celebration of the park.”

Workshops are scheduled for various times through June 12 at 2219 Canal Street. Volunteers may view the schedule and sign up online at buffalobayou.org/event/paw-volunteer-workshops.

Workshops are free and open to the public, and all materials are provided. No experience is required. While the workshops are geared toward adults, kids ages 9 and up who want to work alongside adults are welcome.

Different techniques and tasks will take place each day, as the collective work progresses, Kahn said.

Participants will learn techniques for constructing the large-scale structures. Drawing from a menu of images and themes developed in the community story-sessions, volunteers will add their own visions to the collective roving installation.

“What they experience in the workshops will change day to day,” he said. “Often people leave behind notes about their vision of the structures. It’s up to the next person to decide if they will honor that or not.”

He calls the process a “blind collaboration.”

“You’re collaborating with people who you may never meet,” he said. “It’s almost like a relay race and we see great changes happen along the way. It can be a magical thing when a lot of people come in to fulfill a vision.”